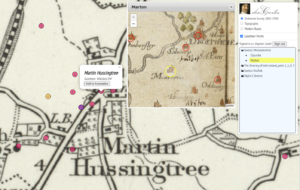 desCartes in action on Saxton's map of Shropshire.

We have conceptualised a tool to assist in the identification of obscurely-gazetteered places and places without names, which further extends the functionality of Recogito by providing the option to georeference as-yet ungazetteered points. These points will eventually be an annotated place's corresponding point references within EMEW, but until then are stored in a private gazetteer known as the Ostrich Gazetteer (not quite EMEW).

The tool is named after René Descartes, who is credited with the idea of using coordinate pairs (Cartesian coordinates) to describe geo-locations. Happily, his surname can also be translated as about maps !