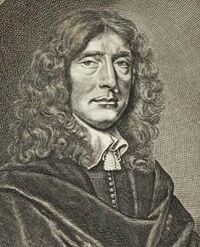 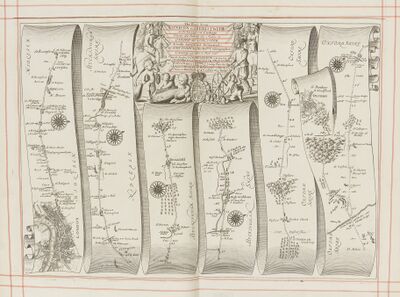 The Road from London to Islip, Britannia Plate 1 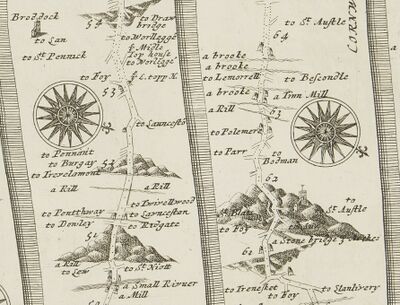 Detail of the Road from Exeter to Truro, Britannia Plate 69

Britannia is arguably Ogilby's best known work. With funding from Cambridge Digital Humanities, we commissioned the high-resolution digitisation of all 100 maps in Cambridge University Library's copy of Ogilby's first edition of Britannia. The full set of digitised images can be seen here: our CarterGraph serves as a geographical index to individual road sections.

A complete list of the 100 plates and the principal towns depicted can be seen on Wikipedia here.

Rather than depicting a "map" as we might understand it, the Strip Maps (with accompanying itineraries) display carefully annotated routes between major towns and cities. Plates I, II and III, for example, depict the route from London to Aberystwyth. Because the Strip Maps are almost like a set of visual directions, we are treated to natural waymarkers such as fields, hills, and forests, as well as man-made features such as bridges, churches, and windmills. Forks in the road and appropriate turnings are also indicated, and supplemented by the detailed itineraries. Ogibly also measures the journey by units of distance giving us the opportunity to physically "map" the routes and cross reference them with other surviving sources.

Although the map depicts a predominantly vertical "road" map, Ogibly also displays compass points along the way as an additional travelling aid.

John Cruickshank recommends Gordon Dickinson's 2019 publication,[1] as it 'discusses in detail the sources and reliability of the Ogilby maps as a resource for study of the developing road network, and although it under-recognises the importance of enclosure by agreement (as opposed to Parliamentary enclosure) in shaping the road network it is still fundamental'. 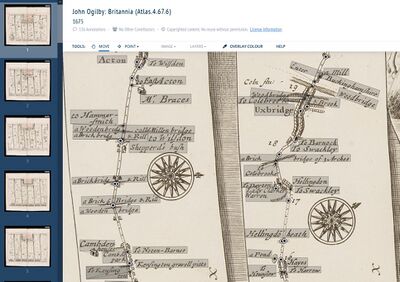 Volunteers will be trained to tag map features, where possible georeferencing and linking to Historic Environment records, Wikipedia, and WikiData items, using an upgraded version of Recogito.

The necessary software upgrades (identified from our earlier experiences with Saxton's maps and Leland's texts) are the following:

Funding is sought for these upgrades, all of which are potentially of considerable interest to other users of Recogito. The lead developer of the software, Rainer Simon, is keen to make these improvements.

The primary output of this project will be an interactive map, tracing on a modern map the courses of Ogilby's mapped roads. All of the features identifiable from Ogilby's survey will be georeferenced, marked, and hyperlinked to relevant records, archives, and internet articles.

All of the extracted data will also be published as Open Data in our Gazetteer of Early Modern England & Wales (EMEW).

Our online-only research model allows us to recruit volunteers who - for reasons of impaired mobility, vulnerable health, or geographical remoteness - are unable to access historical source materials in physical repositories. The training and support we are able to provide allows us to recruit volunteers lacking confidence or with little or no pre-existing technical skills. The wellbeing of volunteers is increased by their involvement in a community of like-minded individuals, collaborating towards a common goal, with online networking and meetings reducing any feelings of isolation. They will develop technical and writing skills transferable to other situations, and besides broadening their historical knowledge will learn something of the interpretation of historical sources and data.