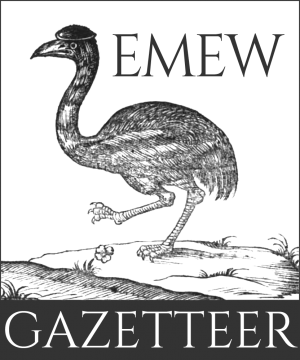 The Gazetteer of Early Modern England and Wales.[1]

The Gazetteer of Early Modern England and Wales

The purpose of this page is to set out our specification and methodology for the Gazetteer of Early Modern England and Wales (EMEW).

Uses for the Gazetteer

Our gazetteer (EMEW) is founded on the principle of linked data. This is built into its creation because (although we will also acquire data by other means) the primary process by which a place is added to it is through linking a point on the image of a document with a feature in a pre-existing gazetteer. The tool we use for this is Recogito. EMEW will record both features and routes (geospatial point and line data), with variant spellings, feature type,[2] temporal attributes, and temporo-geospatial variants, as described in the current (or future) Linked Places Format (LPF) specification.

The use of controlled vocabularies within Recogito, linked to Wikidata identifiers as exemplified here, will facilitate grouping, identifying, and searching for features within EMEW.

In our implementation of Recogito, our source documents (maps and texts) are all served by IIIF. At present, Recogito can import reference gazetteers in only a now-superseded version of LPF (originally LPIF, here), to which our reference gazetteers need first to be conformed. The as-yet empty EMEW will also be added in due course.

Recogito does not (yet) have any functionality for georeferencing source features that do not yet appear in one of our loaded gazetteers, and neither is it capable of 'wildcard' searches for place-names or un-named places. To resolve these issues we have developed our own standalone extension, desCartes, which facilitates the discovery of obscurely-gazetteered places through geospatial ElasticSearch, and also allows the georeferencing of points from a variety of historical, modern, and topographical basemaps; soon it will also facilitate linkage to source references for linear features (roads and waterways) and geographic areas. This tool will be developed further as the basis of our EMEW Interface.

This will take the form of linked tables in a PostgreSQL database, allowing replication of all feature attributes present within the current LPF specification. Our prototype schema (based on LPF) can be seen here, but this will need to be adapted in order to accommodate the extended range of attributes recorded in Recogito, in particular with regard to markup of IIIF images. Any feature or factoid bearing an EMEW-ID may have any number of LPF links to Wikidata, which will be periodically updated programmatically.

EMEW will be stored in a PostgreSQL database, with spatial data using WGS84 projection. Logstash will monitor the database and update an ElasticSearch index.

EMEW's API will deliver data found through ElasticSearch in one of several formats, depending upon the request parameters. Any added search criteria will trigger delivery of a relevant subset (or a single feature) rather than a full dump of the EMEW data. Only the LPF option will deliver all of the data fields.

EMEW will also be offered as an SQL dump.

We propose to publish EMEW under a CC BY-SA 4.0 (ShareAlike) licence. This will allow others to: