Probate documents (that is Wills and Inventories) are hugely important sources for the study of early modern England. For Viae Regiae they are being used to build a picture of the networks of people moving goods across England.

Apart from their appeal to family historians, wills and inventories are potentially a very rich source of economic and occupational data. The deceased may have recorded in their wills an occupation or trade directly connected with transportation (carriers, wagoners, horsemen, or boatmen, for example, or indeed merchants), while their inventories may reveal geographic details of their credit and debt networks.

While the occupations of the deceased are often catalogued, and some of these catalogues are now available online, we are anxious not to overlook the uncatalogued details or the very many records which might appear only in paper or card indexes. Collating all of this information is an enormous undertaking that will only be possible through the generosity of a network of volunteers working in local archives.

The Victoria County History of Hampshire volunteer group has been working on the transcription of 16th- and 17th-century wills, focused on Basingstoke and its surrounding rural area. You can read about their work here.

For an example of a C17th merchant's probate inventory click here.

The ultimate aim of the probate team is to place people within the Viae Regiae transport framework, which is examining inland transportation networks in England and Wales, 1530-1680. Goods move with land and waterborne transport by people who manned that transport infrastructure. The eventual goal of this team is to collate all of the probate material relating to people who may have worked in this sphere in England and Wales in this period, from carters to innkeepers.

While the people we research delivered the crucial goods of life to the people of early modern England, our aim remains much more humble. In the first instance the location of all the people in probate record across England and Wales will be listed for their location, dates and trade. In the second instance a detailed project ought to elaborate on each document, the relationships and places within them to reconstruct part of the social world and economic networks. Longer-term the work done lends itself to members of this team or others to use the data collated to consider a range of research focuses including material culture and social networks.

Our approach involves identifying wills and inventories before converting them using Transkribus to text form. With the Recogito software we can then record the places mentioned so that people, their occupations and places can be entered into the Viae Regiae database.

Probate will run throughout the Viae Regiae project and potentially beyond with wide implications for our understanding of the movement of goods and transport links. In the first year to two years we aim to provide a skeleton of findings from which further analysis can be conducted in the following years.

At the moment we have a core, dedicated team. The nature of probate means that many people have experience of it and could assist in the long run, especially once our processes are put in place during 'seed' project phase in the spring of 2021.

The text-recognition system Transkribus is forming a key part of this project for the collation of probate transcriptions. Also required is the software Recogito. Much of the probate project can be carried out on personal computers. There are however elements of the work that will require physically attending archives, particularly for material held in local record offices.

Individuals and societies past and present made the act of dying a complex procedure, with inherent social and cultural considerations for all involved. In early modern England dying ‘had become a cultural ritual' [J. D. Alsop, 'Religious Preambles in Early Modern English Wills as Formulae', Journal of Ecclesiastical History 40.1 (1989), 19]. We should therefore use wills carefully as their simplicity often ‘cloaks a complex of laws and customs and a tenuous link between precept and practice' [Jeff and Nancy Cox, ‘Probate 1500-1800: a system in Transition' in When Death Do Us Part: Understanding and Interpreting the Probate Records of Early Modern England, 14].

Primary aim: Transcribing wills of all innkeepers in Prerogative Court of Canterbury prior to 1650 to shed more light on the growth of transport infrastructure. Initial work by Jo Sear has found connections along the Great North Road amongst individuals named in the first sampled will, which is an amazing start. 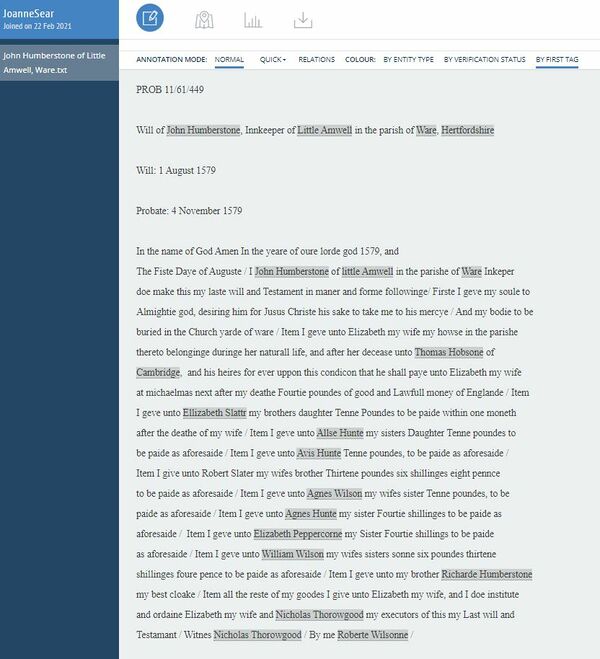 Will of John Humberstone, Innkeeper of Little Amwell in the parish of Ware, Hertfordshire, PROB 11/61/339; dated August 1st, 1579

We have settled on producing full diplomatic transcriptions, as per the guidance from Transkribus: https://readcoop.eu/transkribus/howto/transkribus-transcription-conventions/ This will help to train a Handwriting Recognition Model, variant spellings of place names for the gazetteer, as well as producing accurate transcriptions in general.

In the following table rows with a PROB11 reference have been downloaded by JC.

The probate team are always on the lookout for interested new members! We'd be excited to hear from anyone with experience working with early modern wills and inventories. Our team so far includes academic lecturers, PhD students, family and local historians.

For those of you interested in learning more about probate material and its uses for historical study find below a short bibliogrpahy of some secondary reading.

Joanne Sear and Ken Sneath, The Origins of the Consumer Revolution: from brass pots to clocks (Abingdon: Routledge, 2020). <https://www.routledge.com/The-Origins-of-the-Consumer-Revolution-in-England-From-Brass-Pots-to-Clocks/Sear-Sneath/p/book/9780367341114>;