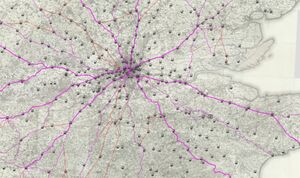 Having already mapped John Taylor's Taverns (1636), we are interested in the records of inn-keepers that might be found in this Series at The National Archives, covering the period 1578-1672. In the first instance, we would like to determine the geographic extent of coverage. [Drop us a line?]

John Chandler (who has recently published a collection of Taylor's travel writings) has highlighted the publication of the Wiltshire Recognizances from 1620, in N.J. Williams, Tradesmen in Early Stuart Wiltshire, 1960:11-51.

This series consists of bonds taken from purveyors of victuals, including inn-keepers, butchers, and cooks, to abide by the laws concerning abstinence from meat during Lent and on other days appointed by statute; and bonds of licensed victuallers, licensing them to sell ale and beer, and prohibiting unlawful games, the harbouring of vagrants, handling stolen goods, drunkenness, and breach of curfew, and enjoining observations of the assize of bread and ale, of attendance at divine service, and the certification of travellers.

Both types of bond give the name and occupation of the principal party and of the mainpernors, or sureties. A few bonds record the names of inns. The series includes both original bonds and schedules of bonds, delivered into the Exchequer by the justices of the peace. The series also includes a bond forfeit for non-performance; and a detailed list of London merchants holding licences permitting non-observation of the abstinence laws.

[Text from The National Archives, catalogue record for TNA E 180]