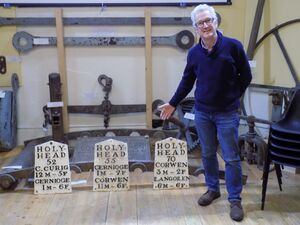 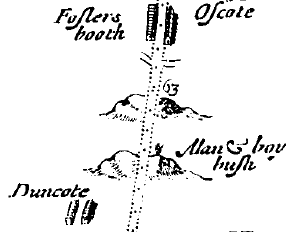 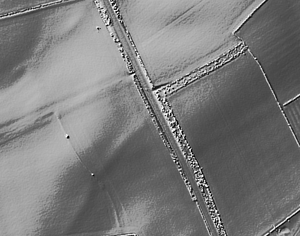 What happened to the Man & Boy Bush? This was a house, probably an inn, shown on Ogilby's 1675 Britannia, on the road from London to Holyhead. According to Ogilby, it stood at a hilltop on the road, just south of Fosters Booth in Northamptonshire. Apart from mentions in the odd road guide derived from Ogilby, I have not been able to find this on any later maps of the area. Inns usually spring up at junctions and crossroads, yet Ogliby showed this one where no other road joined.

Fortunately, I found a little more background on the Blisworth History website, which suggested that this was the crossing point of two older highways. One was Watling Street, which at here formed the basis of Ogilby's road, later a turnpike road which in time became the A5. The other was the Oxenford Way, a Saxon route between Oxford and Northampton. These would have crossed at National Grid Reference SP67835160, where today a bridleway to the east-north-east preserves the line of the Oxenford Wey, the line of which is also visible in the other direction on LiDAR plots. They suggest the Man & Boy Bush was at the intersection, consistent with Ogilby as this is a local hilltop at about the right distance from Fosters Booth. The Oxenford Wey seems to have fallen out of use around the 12th or 13th century, and yet if an inn had been established at the original crossroads, it seems to have kept going long enough to have been noted by Ogilby, a palimpsest of the earlier transport network.

When I walked this way in 2017, I was intrigued to look out for any remains. The main road is in a little cutting here as it passes through the hilltop, but to the side of the road a strip of woodland looked promising. I stumbled around in the wood at the corner of the junction with the bridleway, and, yes, there were humps and bumps in the ground which might just have represented the site of the old inn. Somewhere for an archaeological dig?