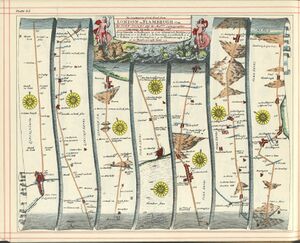 The Oxford English Dictionary confirms that the most commonly used sense of Modern English road as a ‘way or path’ between different places, or leading to a particular place, is first attested relatively late, in the middle of the seventeenth century. [1] When the word road first appears in street-names, it takes over an existing word which meant 'a ride', with its sense shifted to the physical object on which the ride is made. This suggests that something must have been changing the ways roads were constructed, used, or managed in this period.

The papers of Briggs present new evidence from maps, words in parliamentary documents and compounds like "roadbridge" or "roadway", which confirms the Oxford English Dictionary etymology and rules out alternative etymologies which have been suggested; Briggs also argues that this change was the consequence of new central planning of road maintenance by parliament, a process which soon evolved into the privately-financed turnpike system of toll-roads. [2] These were needed by the rapidly developing commerce of the period, and specifically by the new centrally managed postal service. With the advent of new types of road, and new uses for these roads, an old word was taken over for a new use. Briggs also suggests that this occurred at the same time as the <oa> spelling became the standard. [3]

This change apparently occurred during the period of the Viæ Regiæ study.