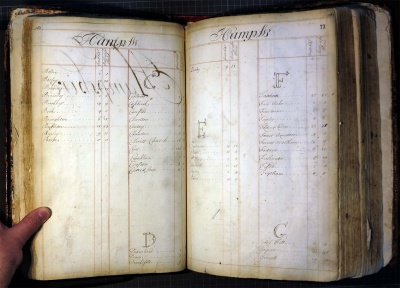 The Monmouth Rebellion of 1685 prompted the government to undertake a survey the following year to establish the number of guest beds and quantity of stabling available across England and Wales for billetting soldiers.

In connection with his work on Ogilby's road survey for CAMPOP, Max Satchell has identified 842 of the most significant places of accommodation, those offering stabling for at least 14 horses.[1] 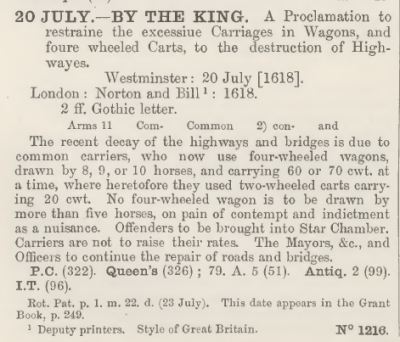 1618 Proclamation against wagons drawn by more than five horses.[2]

This threshold was set based on the number of animals in a typical packhorse train of the period. However, a proclamation of 1618 ordained that wagons should be drawn by no more than five horses, noting that some were being pulled by as many as ten where formerly two-wheeled carts had been employed, perhaps with as few as two horses.

Working with Recogito from images like that shown here, we'd like to establish a network of volunteers with specialist local knowledge to attempt the identification and transcription of all 11,000+ locations listed in the entire survey. Comparison with lists of significant settlements extracted from our map analysis projects (and elsewhere, such as John Adams's 1680 Index Villaris) will enable us to assess the completeness of the accommodation survey, and perhaps help Max to refine further his own work.

Local and regional studies have of course already focused on parts of the 1686 Stabling Survey. In particular, John Chandler has published work which compares the Wiltshire section with data derived from the 1676 Compton Census, and highlights some of the problems with interpreting the Stabling Survey.[3] Philip Riden has published a transcript of the Derbyshire section of the Survey.[4]